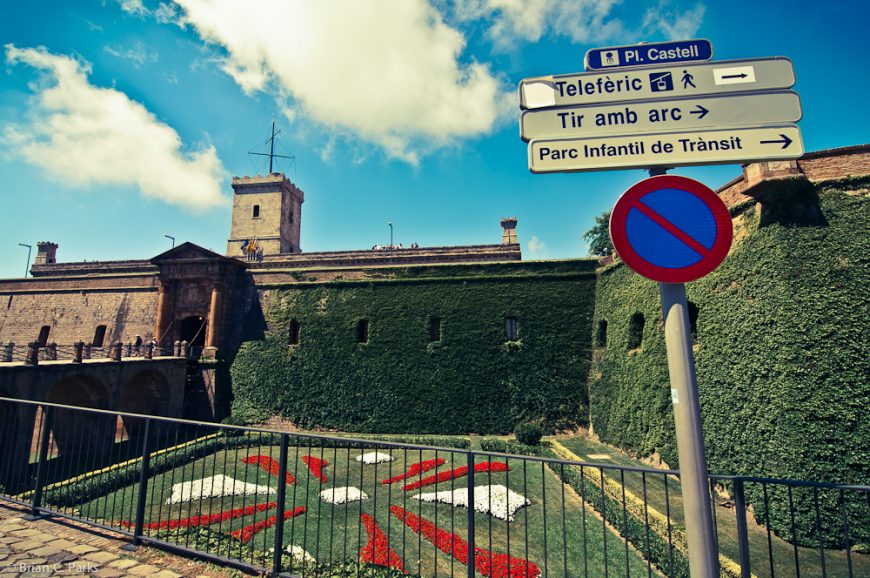 The castle atop Montjuïc was one of the last destinations we visited on our trip to Barcelona, Spain. Though Montjuïc Castell was only a small taste of what the Montjuïc area had to offer (there are supposedly some amazing gardens, the magic fountain, and the national palace, as well), we also wanted to fit in a trip to the aquarium (pronounced ah-kwer-ee-oom; we had a hell of a time trying to explain to the cab driver where we wanted to go).

The quickest way (and maybe the only way) up to Montjuïc is by cable car, and I had high hopes for something really spectacular. Unfortunately, the first cable car is more like a Wonkavator that rises at a rather slow incline up the hill and is (sadly) mostly enclosed. Didn’t get too many good pictures on that one. Fortunately, this short trip just gets you to the base of the hill. To get to the top, you can either walk/drive the winding roads around and around, or take a true cable car up to the summit.

This second cable car was much more rewarding. A four-person car, it pulled us up and out across the horizon, giving us some great views of the entire city. We shared our car with an older German couple, and the guy was up taking photos everywhere rocking the boat like crazy. So of course I got up and started taking pictures, too…

Once we reached the top, the castle was right in front of us. More of a fortress than a true castle, it was impressive nonetheless. The enormous heavy guns mounted to each side provided an interesting juxtaposition between the 17th century construction and the more modern weapons of destruction (apparently the castle has been used as a stronghold, a prison, and a weapons museum among other things).

It’s little more than a courtyard surrounded by four tall walls, but it’s easy to see how it would have been a strategic stronghold during times of war given its location alone. Okay, so apparently it wasn’t a Wonkavator, but a funicular (yeah, like that sounds any more serious).